The Adirondack Chair is a now classic design from the Northeast that traces its routes back to the early 1900s. How it got its exact start isn’t fully known, but the roots of the history of the Adirondack chair began to coalesce in Westport, NY, with a bit of a controversial origin.

According to a blogger for The New York Times, it was Thomas Lee who first came up with the basic and now iconic design of the Adirondack Chair. In Lee’s case, necessity was the mother of invention. He required some lawn furniture for his home in Westport, NY, and what he ultimately created, now called the “Westport Chair,” is believed to be the precursor to the Adirondack Chair.

The Adirondacks, a mountain range, has long posed problems for outdoor chair designers. One source points out that hillside chairs of various designs had long been in use there. But it would seem that, by the turn of the 19th Century, no consistent design save for sloping seats and backs had yet been established. 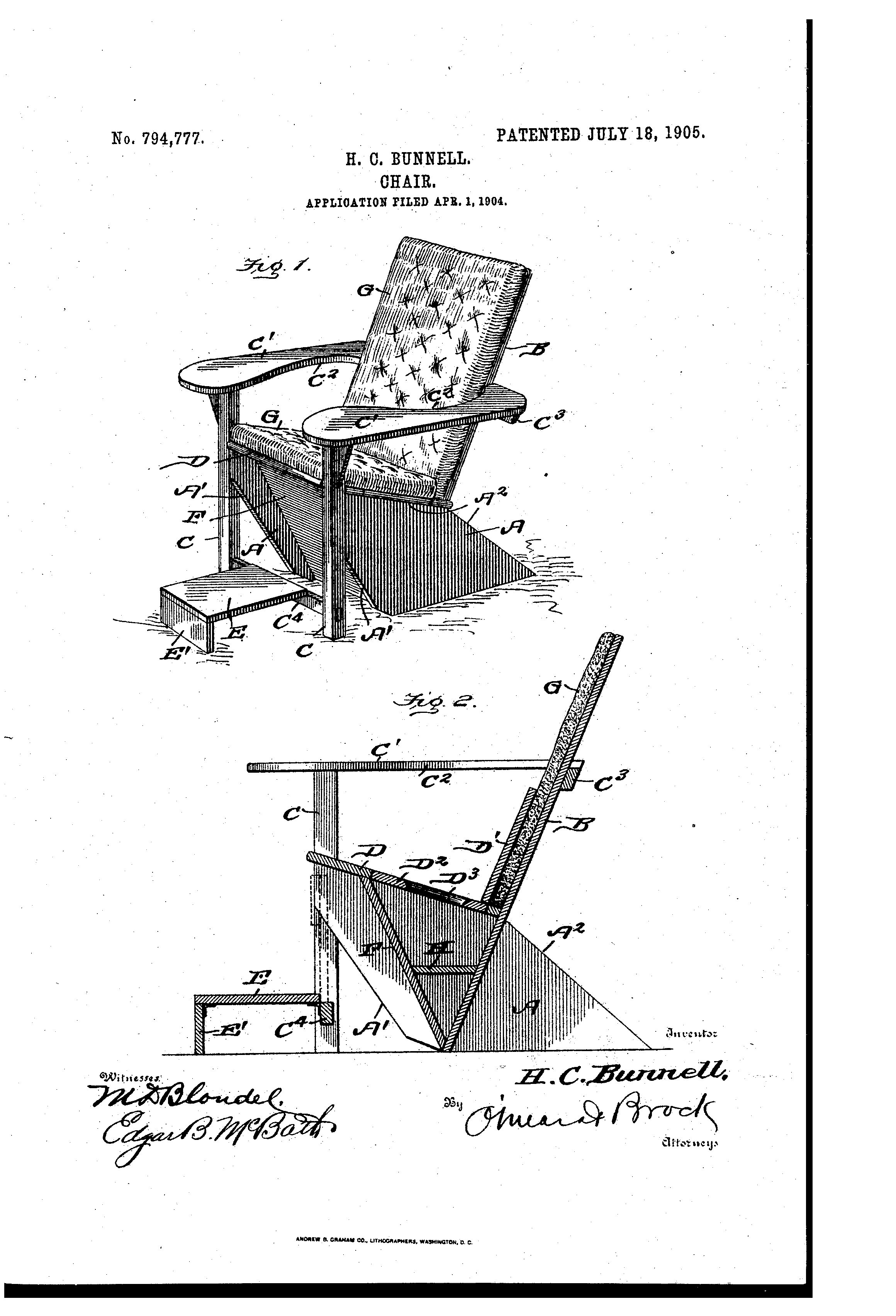 So, while playing around with variations on the hillside lawn chairs of the area, Lee recruited his family to help him test each design to determine which was the most comfortable. Amongst his family, the most popular chair featured a broad, flat back and arms, and a sloping seat. Each of Lee’s chairs were reportedly made from a single maple plank, presumably to keep the design simple.

On completing his lawn chairs, Lee gave the favored design to a friend of his named Harry Bunnell, a carpenter also living in Westport. Bunnell was apparently in need of a source of winter income. Bunnell agreed that the chair had potential and began producing them. On Apr 1, 1904, Bunnell submitted a patent for the chair, saying that he claimed his “invention” as “new.”

Bunnell continued to produce the chair for the next 25 years, even stamping his patent number on the back of it. Whether or not Lee was bothered by this is unclear, but he apparently never attempted any legal means of securing his design in the name of its rightful creator. Regardless, it seems as though Bunnell got away with theft.

To be fair, Bunnell did indeed have his own take on Lee’s original design. Bunnell’s included a foot rest, and Lee’s probably did not, and had sideboards between the legs to obscure the underside of the chair. Bunnell also recommended the use of cushions as optional for the seat and the back, which he said would be removable. And, unlike Lee’s maple chairs, Bunnell’s were crafted from either Hemlock or Basswood.

Bunnell had also considered an alternative design for special use of the Westport Chair. Because the bottom of his design was completely closed in, he conceived of a version of the chair in which a bedpan could be housed inside the seat. For an ill or injured person unable to get to the bathroom in time, the chair could double as a commode. Forty-three years later, William Horn patented a small, portable bedpan for use in hospitals and had even considered the Westport Chair as a possible place it could be stored. 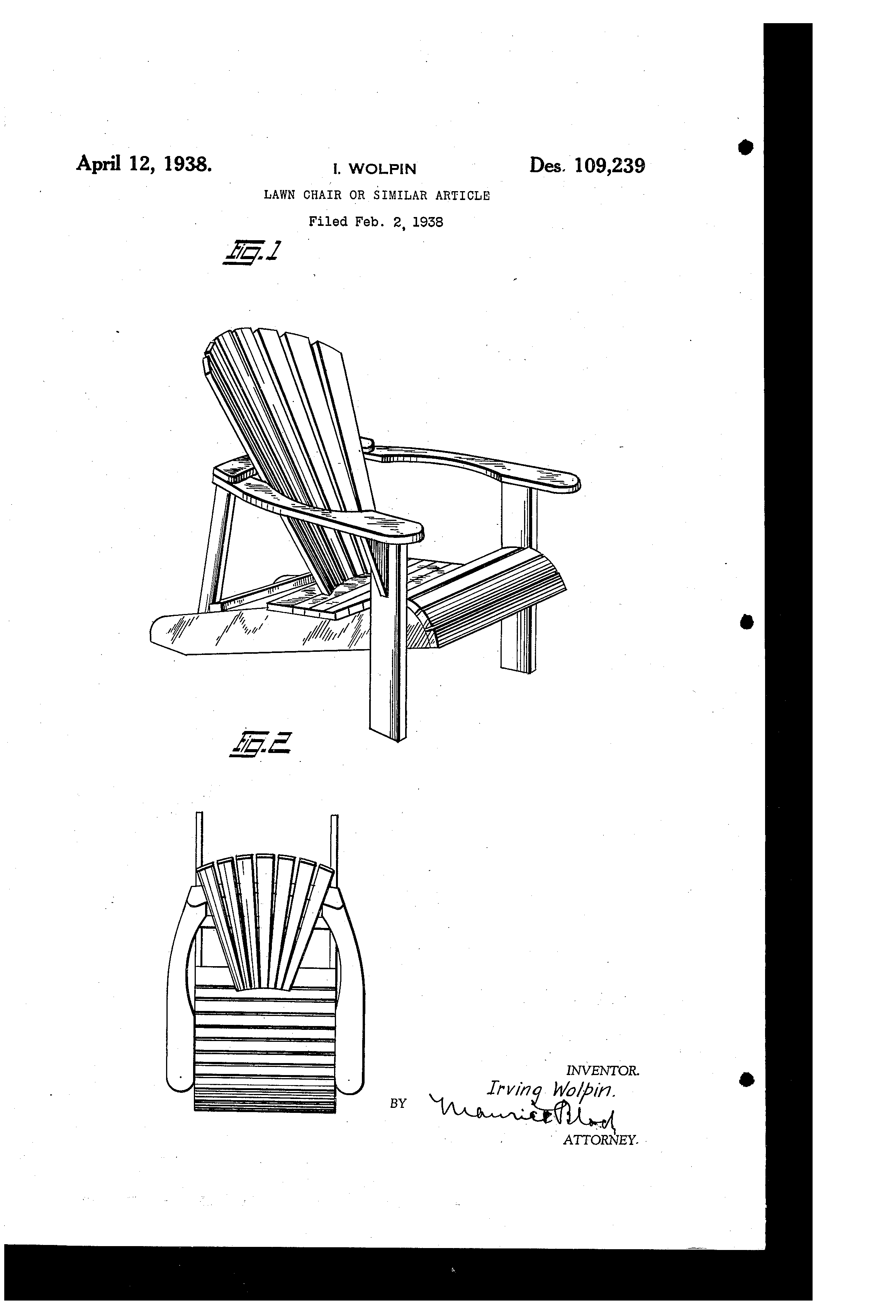 The first time we are aware of the Adirondack Chair design, as distinct from its likely predecessor the Westport Chair was in a patent Irving Wolpin submitted on February 2, 1938, more than 30 years later in New Jersey. Wolpin’s design was unmistakably akin to the modern Adirondack Chair, although he didn’t call it that, referring to it as a “lawn chair or similar.” It was, nevertheless, perhaps the first patent granted for what is unmistakably the Adirondack Chair.

This iconic chair is still seen all over the Northeast today. Guild journeyman member Tyler Gebhardt started out making Adirondack Chairs for his mother on Mother’s Day and has since then made more than he can count.

Although the sloped-seat hillside lawn chair went through a rough patch in its history it seems that it has finally found its form in the Adirondack Chair, the now classic lawn chair for the Northeast.

Traditional, Contemporary, Shaker, Mission and Modern Furniture—Custom Made in Vermont.